I recently got a new mac and was migrating a VMWare Windows Virtual Machine from my other computer. When starting the virtual machine, I received a random message from VMWare Fusion saying “Cannot find a valid peer process to connect to.”

The fix was rather simple as it was just Apple blocking VMWare from running. To fix it, follow these steps: 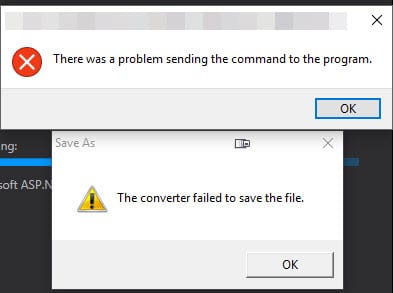 I recently upgraded to Office 2016 on my Windows 10 desktop and was getting the error “Converter failed to save file” when double clicking on the file along with an “There was a problem sending the command to the program error” every time. I finally had enough with the annoyance to troubleshoot it and figured out a solve.

If you have the same issue, here’s how to fix it:

I’ve been spending more time switching from SVN to Git and learning the command line options. I’m finding a lot of the Mac Git terminal commands I run aren’t the same in Git Bash (Mingw64). One of the commands I use is the pbcopy command to copy the ssh key to the clipboard to paste into Github and Bitbucket accounts. I’m starting to use it more as I am learning managing Linux servers and adding my key to login. I’m adding it here as a cheatsheet for myself but I thought others may find it useful.

On Windows, you can run this command to copy your ssh key to the clipboard:

or if you want to view it in the terminal window:

When updating Office 2011 for Mac, you are prompted that you must close “Microsoft Database Daemon” and “SyncServicesAgent”

If you’re trying to update your install of Microsoft Office 2011 for Mac, you may get the following message:

“These applications must be closed before the software can be installed:

Close these applications and try again”

If you try to kill the apps using activity monitor, you’ll find they keep getting restarted. The only way I found that worked to stop them is by following the instructions below.

This will unload the SyncServicesAgent. Unfortunately the Daemon kept running for me after the latest update. To stop that, do the following:

Go back to the install utility and you should now be able to proceed with the install. Once the install is finished, you’ll want to restart the Sync Services Agent, so do the following:

Now you should be all set with updates and can close terminal. I just spent the past two days complaining about Windows 8 to everyone I know because of how awful the experience is. I installed Windows updates, rebooted, and the system stops working.

It turns out it wasn’t Windows causing the problem but ESET AntiTheft on Dell laptops. It turns out there’s a permission bug specific to Dell machines when ESET creates it’s ghost account and instead of giving it restricted access, the system essentially copies the permissions and then changes everything on the C: drive to a state where the permissions are no longer accessible.

Unfortunately, the only known fix at this point is to contact ESET support. I called their support line in North America and the tech knew about the issue right away. You’ll have to reboot into safe mode, and then get them to remote in to install a utility that runs a script that resets the permissions.

The tech assured me they are working with Dell to get this issue resolved so until they do, make sure you don’t activate ESET’s AntiTheft on the Dell machine.

A few years ago, I started at a company as a help desk tech. After establishing myself, I’d often get put on all the…interesting issues. When nobody else could figure out the problem, I’d get called in to figure out the issue. During my early days as a new tech there, the manager of the team passed me a ticket and stopped by to give me background on the situation. This particular client would call in every week because one computer couldn’t talk to the server and at one point, every tech on the team had worked on the problem and nobody had been able to figure it out. My manager told me not to stress about it because it was definitely something on their side but he treats the situation as a rite of passage for all new hires.

I give the doctor a call back and he gets me connected to his PC and begins to elaborate on the problem and all the things everyone has had him do. He explains how his tech knows the problem is with our software since everything on the network side works. He clicks on the Windows XP start menu and by sheer luck, the tech had set the menu back to classic which meant the banner along the left showed which version of Windows was running. As the doctor continued on with his explanation, I noticed the banner on the start menu said “Windows XP Home Edition”.

I politely interrupted the doctor and informed him that I had figured out the problem. He went quiet for a few seconds and said “You haven’t done anything yet and I haven’t finished explaining everything. How could you possibly have figured out the problem?” I informed him that he’s running Windows XP Home Edition which doesn’t support business networking and explains why he couldn’t connect to the server. He insisted that all his computers are running Windows XP Pro and besides, how could I possibly know that without having even done anything?

I asked him to click on the start menu and then he went quiet. I asked if he was there and he apologized and said he was going to call his tech to get the OS fixed. He asked if it would be alright for him to call and request my help if there are any problems from there.

Windows 7 sports tons of new features and surprises that have gotten little to no fanfare. you know that Microsoft has updated the Windows Calculator with Windows 7 with some really new and useful features? Previously, most of these features often required you to open Excel or use some website to solve the problems they address. The calculator sports new features including Unit Conversion, Date Calculation, Mortgage, Vehicle Lease, Fuel Economy (in both MPG and KM no less!) You can find the different options under the View menu after opening the calculator up. See screenshots below for examples of what the calculator can do.